​Salt water (mariculture) and fresh water (aquaculture) fish farming, started in China approximately 4,000 years ago, and is becoming as sophisticated as beef and chicken husbandry in the United States.  Techniques that have been developed in university laboratories and in private research in the last two decades are now being put to commercial offshore fish farming use worldwide --except in the USA.  These innovations, along with an expanding market for seafood and increasing governmental support, have fostered significant growth in offshore sea farming in many countries-- except in the USA.  Fish farming has increased the variety of fish available to consumers and has helped to restore supplies of some species like sturgeon, salmon, redfish, striped bass, and grouper that became scarce -- as their natural habitats disappeared -- or were over-fished -- except in the USA.

The demand for seafood as a primary diet for people is increasing worldwide.  The National Marine Fisheries Service (NMFS) Strategic Plan noted that this deficiency cannot be mitigated by the rebuilding of wild stocks. (see; NOAA in the "Press" above)  Even a significant rebound in wild stocks will not be able to meet the growing global demand for seafood with one hundred million new people a year are  joining Earth’s population. The U.S. demand for seafood is expected to increase by 1.4 million metric tons annually due to population growth alone but -- not from the USA. Food Agriculture Organization of the United Nations (FAO) reports that production of seafood for human consumption needs to increase by approximately 20 million metric tons over the 2016-level in order to maintain present per-capita fish consumption levels but -- not from the USA.  This would require a 28% increase in wild-fishery harvests which has reached its maximum capacity years ago, however  -- no more from the USA.
​
The FAO reports that on average, 27 million tons of by-catch, AKA unwanted fish, are thrown back each year.  Twenty-seven million tons represents more than one-half of all fish produced annually from marine capture fisheries for direct human consumption.  Most often the by-catch is thrown back dead because the fish were either under size limits or the wrong species.  This by-catch process is greatly reducing the numbers of juvenile fishes in the world’s oceans and thus we are --
KILLING OFF OUR NATURAL MARINE LIFE  in our oceans and seas. 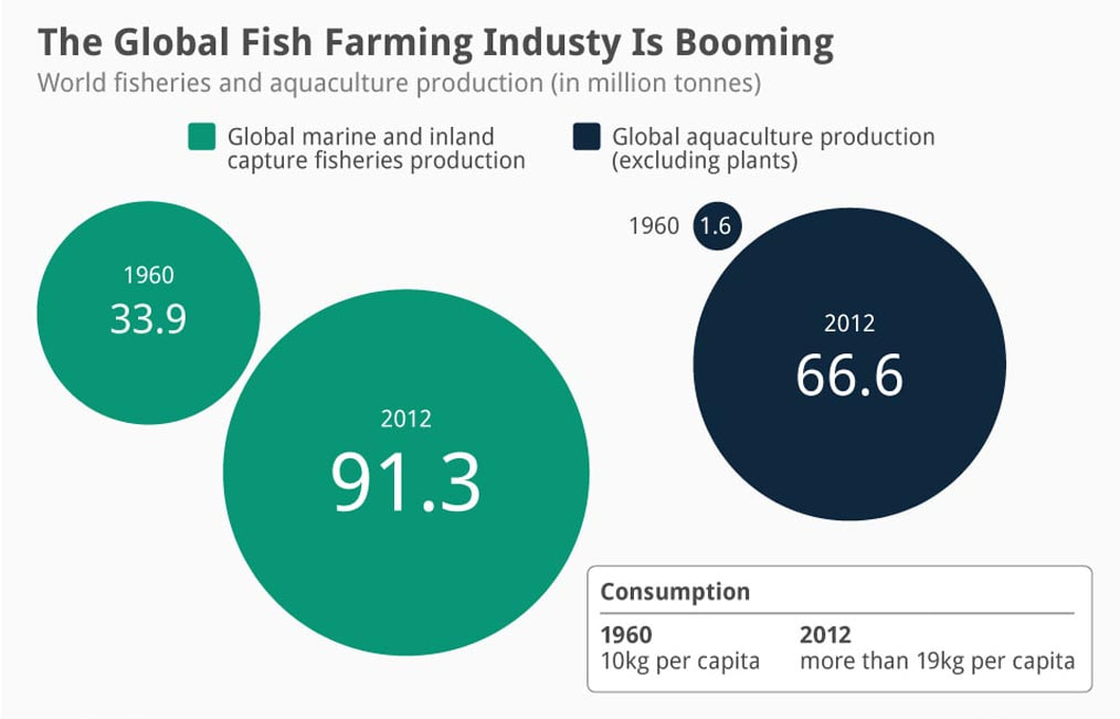 ​Overfishing has been exacerbated by government subsidies, which encourage the growth of the commercial fishing fleet.  Evidence of over-capitalization includes a 2014 global harvest valued at $72 billion which cost $80 billion to produce. (FAO, 2016, U.N. Conference).  Although the world’s commercial harvest has been stable for the past several years at approximately 89 million metric tons, the economic value of the harvest has declined.  Fishermen are forced to harvest less desirable and smaller size species because of the decline of more commercially valuable and larger stocks.  World fishery stocks are at a critical point.  Forty-four of harvested fish species are at maximum sustainable yields.  Twenty-two percent are considered to be over-fished or depleted.  While the commercial harvest of marine fishes is causing drastic declines in many important food fish stocks, the world’s human population continues to grow by 100 million people each year.

WHAT IS THE MOST IMPORTANT FACTOR FOR SUSTAINABLE SURVIVAL OF HUMANKIND ON EARTH?
​ FOOD-FOOD-FOOD
Under current fishing regimes, (where some 60 to 70% of stocks require urgent intervention as they are over-fished or fully fished), the FAO estimated that in 2016, the world’s potential harvest through capture fisheries was between 85MMT to 90MMT annually.  A recent study stated that the U.S. already imports more than $15 billion worth of seafood annually and runs up an annual fisheries trade deficit of $13.5 billion.  The NOAA report in the "Press" section believes that aquaculture and mariculture must play an integral role in the future security of the U.S. supply of seafood, however has never had the budget to stimulate sea farming in order to cut the federal seafood trade deficit. For example, the US spends more on one reconnaissance drone ($130,000.000) than spent  annually to encourage the development of our future seafood security from our vast ocean and Gulf resources.
Support Us